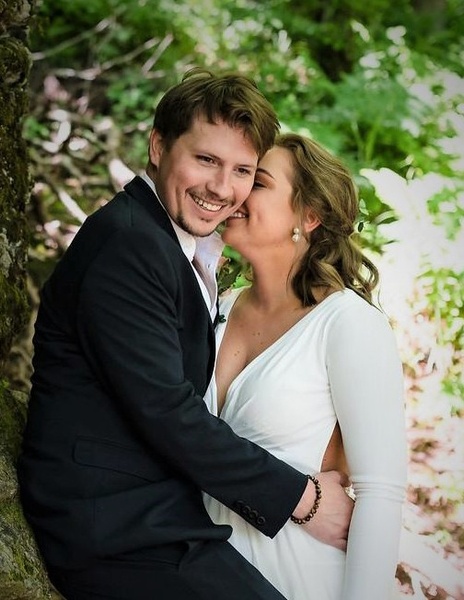 It is a sad and impossible duty to sum up a life with words, the attempt itself already
inadequate. Now that attempt must be made for the life of Alex “Grant” Hawley. Grant
was a son, husband, brother and the father of two French bulldogs. He enjoyed a tight
circle of friends, many from childhood, a set of co-workers and mates, and an
abundance of creative and musical talent. He had the great good fortune to marry
Ashleigh Nicole Haney on June 18 th , 2021, in a unique and intimate ceremony held on
the Blue Ridge Parkway in Ashville. He was a young man who had come into his own,
seized the reins of his life, and with Ashleigh as his partner, looked forward to a journey
of limitless potential and possibility.
Grant was born in Burlington, NC, the second son of Robert Hawley Jr. and Hannah
Medlin Hawley. He came as a beautiful bundle, but one with some physical
complications. Many who knew Grant knew that he contended with a congenital heart
condition; if you weren’t aware of it, it was because he did not want to be defined or
limited by it. Grant was shy during his younger years as a student at Hillcrest
Elementary, Turrentine, and then Williams H.S. but could also be a stage performer and
drummer of not only confidence but of swagger. How he loved his music! No drums
required for him to keep up the beat with his fingers –any tabletop would do. With
drumsticks in his nimble hands, however, the drums became instruments of explosive
expression. He could lose a few pounds in a drum session by working so hard the
sweat run off his face and torso.
Grant attended Alamance Community College, and began working at Zack’s restaurant,
the Burlington institution, in 2005. Many of his fellows and friends joined him there at
one time or another, including his brother Blake. Grant went on to become manager,
making a serious investment in the restaurant and the business. It was at Zack’s that
Grant met Ashleigh. Taken with her immediately, he resorted to some age-old romantic
moves to make sure they ran into each other in a (calculated) totally spontaneous way.
His understated charm eventually won the day, and as Grant’s relationship with
Ashleigh grew, they became part of a circle of four who did everything they could
together: Ash’ sister Taylor and her fiancé Dalton made the perfect comrades.
Getaways to Holden Beach were a highlight for the foursome; Grant, ever a guy who
loved speed, on jet skis with Dalton, left the nail biting to Ash at the house.
We celebrate the life and times of a young man who was unfailingly kind. The first
descriptor of those who meet him, and importantly, also of those who know him well, is
what a gentle and truly nice person Grant was. Not that he couldn’t be impish and
cunning – he could be, as our empathetic guy was also a fierce competitor. If video
games or disc golf were on the agenda, one had better be braced for the likes of Grant.
It was game on. From an early age, when Grant took part in the Father/Son golf
tournaments at Shamrock Golf Club with his dad and his PaPa Bobby, you did not want

to find yourself on the opposing team. Remember those drums? Grant was a natural at
anything that demanded first-rate eye-hand coordination. Perhaps his big brother Blake
captured Grant’s general disposition best when he called him “everybody’s favorite little
brother.” A little brother who had stepped forward and into his own.
Grant is survived by his wife Ashleigh Nicole Hawley; his dad, Robert Lee Hawley, Jr;
his stepmom Celia Legband Hawley; his stepdad Joe King; and his older brother Blake.
None of whom ever wanted to be here without him.


The families request that all attendees please wear masks for the well-being of all who gather.

To order memorial trees or send flowers to the family in memory of Alex Grant Hawley, please visit our flower store.