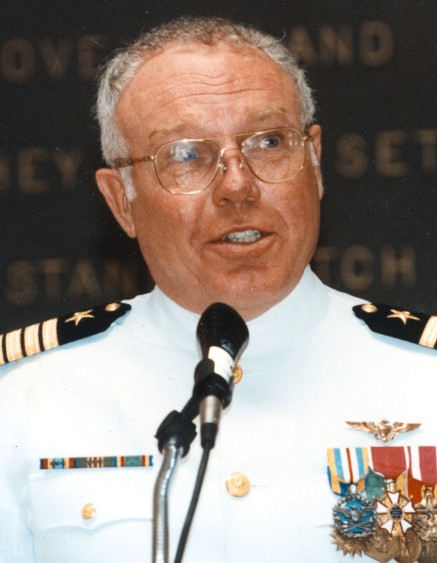 Captain Asbury Coward IV, USN (retired). Asbury “Sandy” Coward died peacefully on March 15, 2021, in Burlington, North Carolina, of complications from multiple myeloma, at the age of 79. Sandy was a naval aviator, a test pilot, and a devoted Navy sports fan who was loved by his wife, children, grandchildren, and generations of naval officers he inspired.

Sandy was born on January 13, 1942, in Green Bay, Wisconsin. His mother, the former Jean Smith, did not know whether her husband, Asbury “Red” Coward III, was still alive. His ship, the early aircraft carrier USS Lexington, was reported sunk at Pearl Harbor, and wartime restrictions on specific ship information was censored by the government. Red survived the war and continued his distinguished career in the Navy. This meant that Sandy moved frequently as a child; he attended third grade in three different states. During high school at St. Andrew’s School in Middletown, Delaware, Sandy played football, basketball, and baseball. He graduated in 1960 and entered the United States Naval Academy that July.

Sandy reported for plebe year from his parents’ quarters on the Naval Academy grounds at 16 Porter Road. His father was the director of athletics, and the extra attention this brought Sandy made his plebe year one of the hardest of his life. During his four years at the academy, Sandy marched in President Kennedy’s inauguration and funeral; cheered Navy’s football team to two top ten finishes, two Heisman Trophy winners, and four wins against Army; and, according to author and classmate Bob Timberg, taught the men of Seventh Company how to dance to the Beatles. Sandy graduated and was commissioned in the Navy with the Class of 1964.

After flight school in Pensacola, Florida and further training on the propeller-driven S-2E Tracker, Sandy reported to the Naval Air Station Norfolk and deployed on the aircraft carrier USS Randolph with anti-submarine squadron 27, the “Pelicans.” His success on the tour gave him the option of attending the Navy Test Pilot School (TPS) in Patuxent River, Maryland. He jumped at the opportunity and thought that if he could succeed at TPS he could meet his initial goal in flight school: to fly jets and fight in Vietnam.

At TPS in 1969 he won the Empire Test Pilot School Award for his thesis and earned top flight grades. As a test pilot he qualified on nine different aircraft, from the A-7 Corsair attack jet to the X-26 sailplane, and was selected for full membership in the Society of Experimental Test Pilots. More importantly to Sandy, he was approved to transition to jets and was assigned to Attack Squadron 192, known as “The World Famous Golden Dragons,” to fly the A-7E. He flew ten combat missions in Vietnam from the USS Kitty Hawk off Yankee Station and completed multiple cruises in the western Pacific.

During his follow-on assignment with the west coast A-7E Fleet Readiness Squadron, Sandy was selected to the initial advisory panel to consult on the design and systems engineering of the aircraft that would become the F/A-18 Hornet. He was one of five Navy and Marine pilots to fly the YF-17, the F/A-18 prototype, at Edwards Air Force Base.

In 1977 he was promoted to Commander and selected to command an aviation squadron. This was a dream come true, for as much as he loved flying jets, he loved leading people even more. He served as the executive officer (XO) and commanding officer (CO) of Attack Squadron 37, “The Bulls.” During this time, he drove a blue Fiat X-19 convertible sports car with the Bulls logo painted on the side, but he was proudest that one hundred percent of his first-tour pilots elected to stay in the Navy.

Sandy's life took a major pivot in 1979, when he rekindled a relationship with the former Mary Croom Whitfield. In college, Sandy and Croom had dated for two years but broke up when she left for a year of study in Spain. In flight school, Sandy married Dagmar Giffen, and they had a daughter before divorcing. Sixteen years after their first break up, Sandy and Croom met again. She had also been married, had children, and divorced. They fell in love again and married in December 1979. Sandy said it was the best thing that ever happened to him. He became a devoted parent to Croom's school-aged children, and imparted to them his love of sports, the importance of hard work, and the value of excellence.

With this new family, Sandy returned to the Navy Test Pilot School, where he served as the XO and CO. He then served a two-year tour as the Air Operations Officer of Carrier Group Four. Sandy spent 104 straight days at sea in the Indian Ocean during the monsoon season, and also negotiated, planned, and directed aNATO exercise which included an aircraft carrier operating in Norway’s Vestfjord and flights within 200 miles of the Soviet submarine base at Murmansk.

During his subsequent Pentagon tour, Sandy’s efforts in the Office of the Secretary of Defense enabled the Air Force to move the current F-22 Raptor into full-scale development. From 1987 to 1990 Sandy served as an Air Wing Commander which included day and night carrier landing qualifications in both the A-6 Intruder and the aircraft he helped develop, the F/A-18 Hornet. As the Commander of the Carrier Air Wing 17 on the USS Saratoga he was responsible for more than 2000 people and 90 aircraft. Sandy held his troops to high standards and was gratified when they exceeded them. This was Sandy’s last assignment as a pilot, and in 1990 he headed to the Pentagon with 5660accident-free flight hours in 52 different aircraft and 800 landings on 15 aircraft carriers.

On the staff of the Chief of Naval Operations, the highlight for Sandy was briefing the Secretary of Defense Dick Cheney on Naval Aviation’s lessons learned from Operation Desert Storm. In his final posting in the Navy, Sandy returned to the Naval Academy, where he became the Director of Candidate Guidance and lived on the Yard. Charged with expanding recruitment for the academy, Sandy created early admissions programs that continue to benefit the Navy today.

In June 1994, after 30 years of service (including more than 6 years at sea), Sandy’s retirement from the Navy mirrored his entry: he walked from his quarters at 6 Porter Road to the retirement ceremony he shared with many classmates. He and his wife Croom built a house in Annapolis, and he began his second career. For the next fourteen years he commuted to Washington and worked in business development for Loral Corporation and, after its acquisition, for Lockheed Martin. He hated being stopped in traffic, and a career of carefully planning aerial attacks meant that he studied maps and knew every shortcut and diversion that could save him time, including a sly U-turn within the U.S. National Arboretum. He retired for a second time in 2008 to travel with Croom and devote himself more fully to being the number one fan of Navy sports.

Navy football aficionados might recognize his profile (and his booming voice) from his post on the first row of the upper deck at the fifty-yard line of the visitors’ stands. And while he was a devoted fan of the football team, he was also a staunch supporter at home games for women’s soccer, women’s lacrosse, men’s and women’s basketball, and wrestling. He also covered the country to see some of these teams play. Sandy was a trustee of the Naval Academy Athletic and Scholarship Program, a division of the Naval Academy Foundation.

From a life shaped by being the son of a Navy man, attending the academy more than a decade before it became co-ed, and earning his wings eight years before the Navy allowed women to fly, Sandy’s role in promoting and recruiting women in the Navy came as a surprise to himself and to many. He was the CO of Test Pilot School when Colleen Nevius became the first female graduate of the school, and when he was the Director of Candidate Guidance at the Academy, he worked assiduously to recruit, mentor, and sponsor a generation of Navywomen, including the recent U.S. Senate candidate from Kentucky, Amy McGrath, and a dazzling array of other successful women.

Sandy and Croom developed particularly close relationships with the 25 midshipmen they sponsored between 1992 and 2008. As sponsors, they provided a home-away-from home and subtle lessons on how to be a naval officer and a person. Sandy shared his career stories with them and his fierce love for the Navy and his family. He unwaveringly supported his “mids”: he delighted in their successes and remained steady throughout their trials.

Sandy was also a homebody who loved to watch sports at home and to play golf alone. Yet he had a wide variety of friends and admirers on the online discussion board linked to Navy sports where, since 2004, he was known by his username, the modest acronym WGLAP (World’s Greatest Light Attack Pilot). His commentary displayed an encyclopedic knowledge of Navy sports, insightful analysis, the consistent championing of women’s sports, and spicy banter with the other service academies.

Along with all of these accomplishments and loves, Sandy treasured his family. He is survived by Croom, his wife of 41 years, his daughter Erin Plumb (Marion), his stepchildren Dodie McDow (Alison), Randolph McDow (Lauren), and Mary McDow, and his brother Curtis (Julia). His grandchildren in age order are Maggie, Grace, Lin, Emma, Solly, Luis, Eston, Alejo, and Liam. He delighted in their accomplishments, and treasured weeklong Christmases with his children and grandchildren all under one roof in Costa Rica or South Carolina.

Sandy was not religious but when he learned of his cancer diagnosis shortly after moving to North Carolina, he connected it to his 800 successful landings on aircraft carriers and wrote to a friend, “If there really is a ‘Great Carrier in the Sky’ you can bet your bippy I’ll be hawking the pattern looking for #801.”

The family will have a private burial at the Naval Academy and will host a memorial service in Annapolis at a future date when COVID restrictions have been eased. In lieu of flowers, the family requests any donation in Sandy Coward’s honor can be made to the Naval Academy Athletic Association (NAAA), address: NAAA, Athletic Development, 566 Brownson Road, Annapolis,MD 21402).