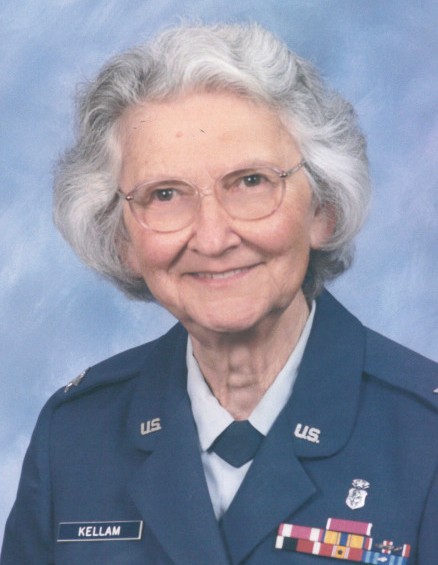 “Colonel Agnes” was born June 29th, 1927 and grew up in the Burlington, NC area.  Her parents, Samuel Martin Kellam and Jessie Louisa Oliver Kellam preceded her in death when Agnes was a young girl.  Agnes had 6 siblings who all also preceded her in death.  They were brothers Roy Kellam and Harvey Kellam, and sisters Edna Kellam Robertson, Esther Kellam Isley, Ruth Kellam Phillips, and Ada Kellam Ridge.

Agnes chose a career in nursing and graduated from the Knoxville (TN) General Hospital School of Nursing.  Upon graduation she entered the United States Air Force as a commissioned officer in 1951 and served her country faithfully until her retirement as a full Colonel June 30th, 1975.

During her military career Colonel Kellam had a variety of assignments, to include Keesler AFB MS.; US Air Force Hospital Wiesbaden, Germany; James Connelly AFB TX.; Ladd AFB Alaska; Myrtle Beach AFB SC.; US Air Force Base Tachikawa, Japan; Reese AFB TX; and Sheppard AFB TX where she retired as Chief Nurse at the base hospital.

Recognized as a superb officer and nurse, Colonel Kellam was 1 of 2 women selected to attend a class of 500 students at the Air Command and Staff College in Montgomery Alabama.  Upon graduation she continued her assignments as a highly skilled Air Force nurse and leader, receiving numerous letters of appreciation from her colleagues and patients.  Her awards include The Legion of Merit, The Meritorious Service Medal, and the Air Force Commendation Medal.

After retiring from the United States Air Force “Colonel Agnes” returned to her roots in Burlington NC and to her family, where she remained for the remainder of her life.  Agnes was deeply involved with her family, her Church, and The Society of Air Force Nurses.  She organized and held annual family reunions at her home for many years.  She remained close friends with many nurses through the Society of Air Force Nurses, attending many state and national level functions.  Agnes was often the “family nurse” and both loved and was loved by all her family members.

A Celebration of a life well lived will be held at 2 PM Saturday, November 6th, 2021 at Lowe Funeral Home by Terry Rikard, Minister of the Mebane Street Church of Christ, Burlington, NC, where Agnes was a faithful member. Visitation will be at the funeral home from 12:30 to 1:45 and at other times the family will be at the Killmeier home in Graham, NC.  The burial will follow at Mt. Pleasant UMC Cemetery, Kimesville NC, with full military honors.

Memorials may be made to Mebane Street Church of Christ, PO Box 380, Burlington, NC 27215.

The family would like to thank the staff at Twin Lakes Coble Health Care for their dedicated and loving care of “Aunt Agnes”.

To order memorial trees or send flowers to the family in memory of Col. Agnes Kellam, please visit our flower store.
Send a Sympathy Card