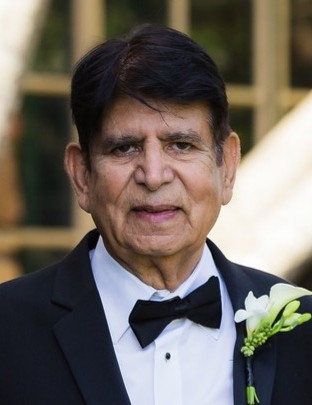 Dr. Bhatti was born in a small village called Rasulpur in Pakistan on January 25, 1936, and graduated from the prestigious King Edward Medical College in Lahore, Pakistan. He immigrated to the United States in 1963 where he completed his intern year at Resurrection Medical Center in Chicago. He went on to do his general surgery residency at Saint Francis hospital and Rush University. He further specialized in thoracic and vascular surgery, with fellowships at Wake Forest University.

He settled in Burlington, North Carolina where he and his wife Zaib raised their 6 children. He practiced general and thoracic surgery in Alamance County from 1976 until his retirement in 2012. He was also a proud member of the Association of Pakistani Physicians of North America and served as president of the North Carolina chapter. He was one of the first Muslim physicians in North Carolina and played an integral role in establishing the Muslim community here.  He had an unwavering faith, but was also dedicated to building bridges across faith communities and participated in interfaith dialogues throughout the state.

Dr. Bhatti was dedicated to helping others and was an extremely charitable man, up until the end. He spent his life providing care for the needy and sponsoring orphans across the world. He was known as a man of dignity and honor and as someone who would never refuse a request for help, no matter how big or small. To further his mission of helping others, he helped establish the Al-Aqsa Community Clinic and spent many years providing free healthcare to those in need.

The family knows Dr. Bhatti's life positively impacted many members of the community- his colleagues, patients, neighbors, and friends - and are so grateful for the outpouring of love, memories and support that have been shared with them. The Bhatti family will be receiving friends Saturday, December 19th from 2-4PM via drive-thru outside of the Al-Aqsa Community Clinic at the Burlington Masjid to share memories of their beloved husband/father/grandfather.

In lieu of flowers, donations may be made in Dr. Bhatti's name to either of the following organizations:  Alamance Regional Charitable Foundation where donations will be used to help cover healthcare expenses for patients in need or the Al-Aqsa Community Clinic which provides free healthcare to the community.

To order memorial trees or send flowers to the family in memory of Dr. Mohammad Bhatti, please visit our flower store.
Send a Sympathy Card