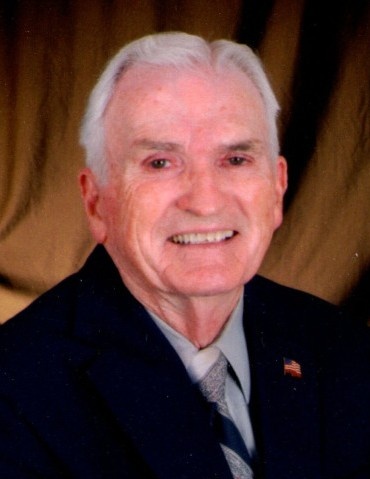 Eugene Monroe Chrismon, 88, of Browns Summit, passed away Wednesday, September 2, 2020, at the Hospice Home of Rockingham County.  A native of Guilford County, Eugene was the husband of Dorothy B. Chrismon, who survives.  He was the son of the late Myrtle W. and Ira B. Chrismon.
Eugene was a member of Apple’s Chapel Christian Church in Gibsonville, and served in numerous ministries of the church over the years.  He was active in the Senior Ministry, often volunteering as the “designated driver” for the group’s trips and outings.

Following school, he served in the United States Army for two years, being honorably discharged with the rank of Corporal.  He retired after working 36 years at Western Electric in Burlington, North Carolina.

In addition to his wife of 69 years, Eugene is survived by their children, Dennis Chrismon (Bonita), Dale Chrismon (Lisa), Darlene Crump and Diane Harvalias (Georgio).

In addition to his parents, he was preceded in death by brothers, Jesse Chrismon, Loyd Chrismon, Pete Chrismon, Jake Chrismon, Golden Chrismon and Donnie Chrismon; sisters, Thelma Whitesell and Fleta Coltrane; a son-in-law, Tim Crump; and a grandson, Stelios Harvalias.

The Funeral Service will be held Sunday, September 6, 2020 at 2:00 PM at Apple’s Chapel Christian Church.  Interment will follow in the church cemetery.  Eugene will lie in state on Sunday before the service from 12:45 till 1:45 PM at the church.  Eugene can be viewed at Lowe Funeral Home on Saturday from 9:00 AM till 4:30 PM. Please wear a mask at all gatherings, especially the church service.

To order memorial trees or send flowers to the family in memory of Eugene Chrismon, please visit our flower store.
Send a Sympathy Card