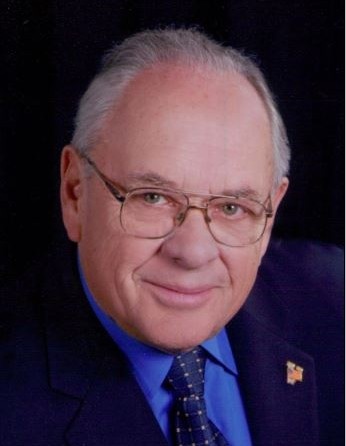 Elon-Joseph “Joe” Venor Halliday, 82 passed away on Sunday, February 7, 2021. He was born in Orange, New Jersey to the late Joseph and Sophie Woitow Halliday. He was the husband of 61 years to Diane Wadas Halliday who survives.

Joe graduated from Jonathan Dayton Regional High School, Springfield, NJ in June of 1956. He lettered all four years in football and baseball (A New York Yankees Fan). After graduation he entered military service in the US army. In 1959 he married Diane and they moved to North Carolina for him to attend Elon College. Joe worked for 35 years with Kayser -Roth Hosiery as a computer manager. Then he went to work for Burlington Industries in Transportation until they closed. Then he went to work for Whitefield Properties and finally his favorite job as a train attendant at the Burlington Train Station until he officially retired in 2016. Joe was a member of the Blessed Sacrament Catholic Church and a member of the Knights of Columbus. Joe loved trains and his hobby was going to toy train shows and collecting toy trains. His father got him started at the early age of 5. Joe enjoyed putting out layouts at Christmas. He belonged to TCA, and Company Shops Railroad Club.

He is survived by his wife, Diane Wadas Halliday of the home; daughter, Wendy Halliday Ulmer and husband, Tom of Ohio and a son, Charles Joseph Halliday of Oklahoma; grandchildren, Courtney, Cristal, Avery and Owen of Oklahoma, Jaclyn, Hickory, NC Rachael and Logan of Nashville, Tn.; 4 great grandchildren; brothers, George Depta and wife, Bella of Florida and Robert Halliday and wife, Pat of South Carolina; a nephew, Bobby and a niece, Kelly of South Carolina. He was preceded in death by his parents and a son-in-law, Ray Crocker.

A Mass of Christian Burial will be held on Saturday, February 13, 2021 at 9:00am at Blessed Sacrament Catholic Church by Rev. Paul Lininger, O.F.M. Conv. The burial will be at Alamance Memorial Park with military honors by the US Army. There will be a public viewing of the body from 1-5pm on Friday at the funeral home. The service will be live streamed on Zoom: https://us04web.zoom.us/j/78685828441?pwd=eXdBYmLJWnNHYnZQUIQzSmEyeLR5dz09

Memorials may be made to the Humane Society of Alamance County, 2213 Edgewood Avenue, Burlington, NC 27215.

To order memorial trees or send flowers to the family in memory of Joseph Halliday, please visit our flower store.
Send a Sympathy Card