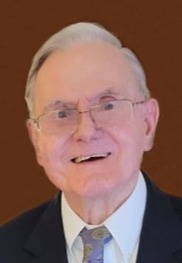 Mr. Thomas Eugene Register, age 91, passed away on Thursday, May 5, 2022 at his residence after several months of failing health.

Thomas was born on November 23, 1930 in Henderson, NC.  He graduated from Henderson High School and he attended Campbell College where he played football and was the President of the Student Council.  He received his Bachelors Degree from Wake Forest and his Masters Degree in Botany form UNC Chapel Hill.  He married his high school sweetheart, Mary, in 1954 and they were married for 49 years until her death in 2003.  He served in the U.S. Army Medical Corps from 1954-1956.  Thomas was the Director of Carolina Biological Slides for Carolina Biological Supply Co. for 40 years until his retirement in 2000.  During his time in Burlington, he served as a steward and youth counselor at Front St. United Methodist Church.

In 2005, Thomas married Anne G. Hostetler of Raeford, NC and they lived in Pinehurst, NC until 2017 when they relocated to Cambridge Village Retirement Center in Apex, NC.  Thomas served as a Deacon at First Baptist Church in Pinehurst and he and Anne enjoyed gardening and handbells while residing at Cambridge Village.

The family will be holding a private service at a later date.

In lieu of flowers, memorials may be made to Amedisys Hospice, 2975 Crouse Lane, Burlington, NC 27215.

To order memorial trees or send flowers to the family in memory of Thomas Eugene Register, please visit our flower store.
Send a Sympathy Card