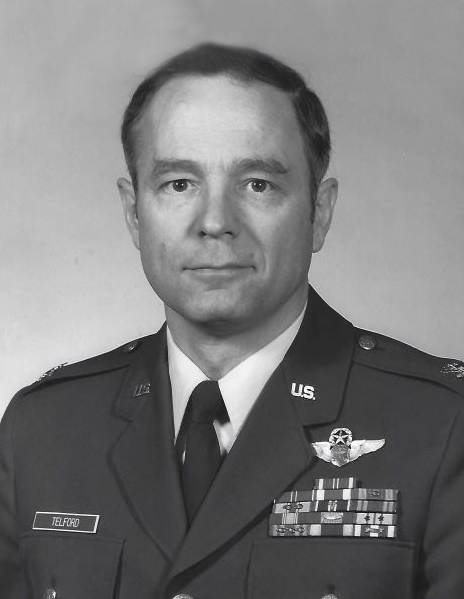 Born on January 23, 1935 in Brooklyn, NY, he was the son of William Edward and Audrey Telford, formerly of Ontario, Canada. His older sister, Shirley Newhook, resides in Newfoundland, Canada. While his birth family retained their Canadian citizenship, Bill became a true American and devoted his life to his beloved country.    He is survived by his wife of 32 years, Annie; sons Bill, Jr. of San Antonio, TX, Ric of Chapel Hill, NC, John of Dallas, TX; daughter Jana Beal of Denton, NC; stepsons Peter White of Mobile, AL and Chris White of Vandalia, OH. He was a beloved Opa to his 10 grandchildren and 4 step grandchildren and a cherished uncle to his two nieces and nephew.

Bill’s love of flying spanned from early childhood through high school and two years at Brooklyn Polytechnic Institute, during which time he served as a member of the Air National Guard. The Air Force Academy was about to open and Bill applied for and was accepted to become a member of the first academy class. He graduated in 1959 and began his career as an officer in the US Air Force. He married Emely Jensen in June of 1959 and they had four children.

As a young officer, he was a member of the B52 crew that established the world record for flying without refueling. He served as a member of a B52 flight crew during the Cuban Crisis. His 29 years in the Air Force included a Vietnam deployment and an assignment in Planning and Programs of Weapons Systems at the Pentagon. Other assignments included HQ Strategic Air Command, Nebraska, Warner Robbins AFB, Georgia, Minot, ND, Alabama, California and Wright Patterson AFB, Ohio. His last assignment was Deputy Commander of the Defense Personnel Support Center in Philadelphia. Following his retirement from the Air Force, he took a position as Vice President for the National Industries for the Blind (NIB) in Alexandria, VA.

Bill retired from NIB in 1994 and moved to Smith Mountain Lake (SML), VA. He embraced life at the lake and quickly became a member of the SML Lions Club. Bill will be remembered as an active member of that community where he held a leadership position in numerous organizations: Franklin County Red Cross, the SML Lake Association, SML Home Tour and president for two neighborhood communities. He supported and served as president of the SML Lions Scholarship Trust. His leadership qualities, integrity, and love of family, friends and country will forever define him for the great human being he was. Bill and his dog Kelly (adopted from the Franklin County Humane Society) were a common sight as they took their daily walks. His family and friends raise their glasses one last time at the bar and say, “Cheers”.

A memorial service at Trinity Ecumenical Parish in Moneta, VA will be held at a later date. Burial will be at the Air Force Academy Cemetery at some time in the future.

Memorial contributions may be made in his honor and memory to the Smith Mountain Lake Lions Scholarship Trust, PO Box 655, Hardy, VA 24101

To order memorial trees or send flowers to the family in memory of William "Bill" Telford, please visit our flower store.
Send a Sympathy Card